So the one highlight in all of Worcester, Massachusetts that all of us college students are able to look to with excitement and joy is Shrewsbury Street. Literally all up and down the street are just unreal restaurants. You would never think that those restaurants could be in a city like Worcester, but they are. And it’s awesome.

We don’t regularly head over there for dinners, though. Part of it is the drive (it’s so much easier to go to Panera, which is only like five minutes away), but another part of it is the fact that we don’t have any money, and these restaurants kind of require you to have money.

But this past Friday, we were like, “empty wallets be damned, we’re going to The Fix.” 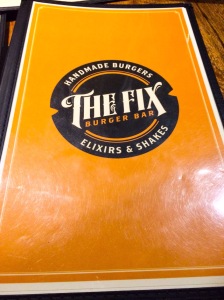 The best part of The Fix? The milkshakes. Hands down. Nobody would win trying to argue that with me.

The Fix’s milkshakes aren’t completely rated PG, though. Seeing as I’m 21 (woohoo being legal!) I opted to get my chocolate milkshake boozy, and while it was delicious, I think next time I’ll get mine sans alcohol. I certainly wasn’t looking to get tipsy during that dinner, and it was kind of strong. I would’ve preferred having a purely chocolatey experience.

But isn’t it beautiful? Absolutely drool-worthy.

My roommates and I also got our trademark app– fried pickles. And before  you cringe and ask what the heck a fried pickle is, let me tell you: these things are Out. Of. This. World. Like right now I miss them. I miss fried pickles. I ate them less than a week ago, and I already miss them. 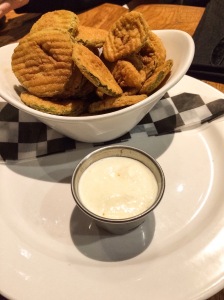 Oh the things I wouldn’t do for some of those right now.

For my meal I ended up getting a burger (duh… it’s The Fix’s specialty). Now, I’m not the biggest burger person. I’m not going to say that I don’t like them, because that would be a total lie, but I’m not the type of person to crave a burger or to go out of my way to order one at a restaurant. When my mom makes them I usually just have the plain patty with no bread (yup… I’m that lame).

So, seeing as I only got a plain hamburger with pickles, I didn’t take a picture. But I’ll tell you this: The Fix has a zillion specialty burger options with a crap ton of different toppings. For anyone who is a huge burger-loving foodie, this place is for you. Just take a gander at that menu: 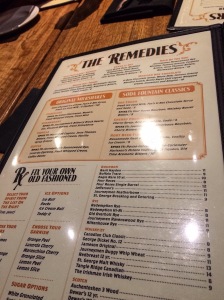 Probably the best part of The Fix was the atmosphere. It was a small restaurant with a bunch of tables kind of close to each other, but not in a sloppy or invasion-of-privacy kind of way. It seemed really warm this way. Shrewsbury Street in general is really pretty with all of these nice restaurants lining either side of the street, so the view out the window ain’t too shabby either.

The inside was dressed up in really cute, rustic New England kind of Christmas decorations and holiday music was playing in the background. I really liked that the restaurant seemed lively but I was still able to hold a conversation with my roommates. Plus, it had a nice family atmosphere. Funny, considering the fact that the restaurant prides itself on its great alcoholic desserts, but it wasn’t in any way tacky or crude. 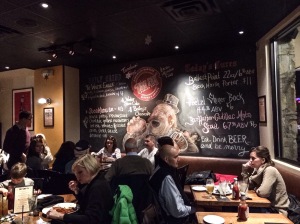 So, I guess to sum up: Would I recommend this place to a friend? Yeah! Of course! I’d just suggest planning ahead to spend some money (I mean I only paid around $20, but for me, an unemployed college student, that’s a wee painful to part with) and to be in the mood for some crazy (delicious) burgers and shakes.