Some people don’t know this about me (although if you follow me on Twitter, I’m not sure how you’d miss it; I’m so obnoxious about it): I write for this website called HerCampus.com. HC is super rad because it forces me to sit down and write for an audience once a week, answer to a bevy of editors and keep a really strict deadline. It

advocates for women, teaching us how to make safe choices with our bodies, all the while giving us a place to get advice about boys and makeup trends.

With it being such an important part of building my writing portfolio, I check HC pretty regularly to see when my new stories are posted (like I said: they have endless amounts of editors, so I’m never really sure when I’ll be seeing my name in the HC lights). I think it’s pretty important that I plaster the link to my articles all over social media to up my page traffic. Plus, who doesn’t want to hear what I have to say? You’re reading this, aren’t you?

So there I was, about to write this Provoc column about how much I hate sweatpants (I was going to quote Karl Lagerfeld and everything), when I decided to log onto the HC site to see another one of my articles. But then I got distracted because did that headline really say that a female judge ruled it not an invasion of privacy to take pictures up a girl’s skirt?

I’m sorry, but what?

According to HC, last month, D.C. Superior Court Judge Juliet McKenna ruled that “a person does not have ‘a reasonable expectation of privacy’ when ‘portions of the body [are] exposed by the individual’s voluntary physical positioning and the fit and the fabric of the clothing worn.”

Except all I read was, “You’re vulgarly exposing yourself for wearing a skirt, so it’s your own fault when people take pictures up it.”

In Judge McKenna’s defense, she did call the perpetrator’s actions “repellant and disturbing,” according to HC.

Because yes, women who bring cases like this to court pay all of those lawyer fees and relive that kind of humiliation for the gratification of a judge’s words… Not.

First off, in wake of all of this, I’m going to have to tip my cap toward Her Campus (maybe I’m a little biased considering working in their offices after graduation is The Dream, but hey, I’m only human). Good on you guys for giving stories like this big bold headlines, for enticing me to click on it when all I wanted to know was about the best Halloween costumes for 2014. Good for you guys for posting girl-power articles like this all the flippin’ time.

I’m not some bra-burning feminazi. One of my favorite pastimes is baking. I paint my fingernails religiously. I join my mother and sister in clearing the table for my brothers and father when we have holiday dinners. I don’t mind fitting into those kinds of 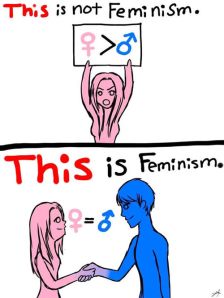 stereotypes because baked goods are delicious, because painting my nails is my way of winding down, because I take care of my brothers and father because I’m a nurturing person by nature. What I do mind is being treated like less of a human-being.

You can’t leak photos of me from my phone because I didn’t say that you could. You can’t call me a vulgar name because my parents named me Sara and it’s what I like to be called. You can’t assume that after I share a cab home with you that I want anything else because that’s not something I ever said. You can’t stare at other parts of my body because my face is up here and that’s where my words are coming from.

I’m going to be real with you all here: After years of competitive dancing, I’ve learned not to wear a skirt without a pair of spandex shorts on underneath. And after all of those years of dancing, I’m not even that embarrassed wearing just the shorts. But if someone were to take a picture of me up my skirt anyways, I’d be beyond skeeved. You weren’t taking a picture of the shorts because you were going to run an ad for UnderArmour; you took the photo because you didn’t think there were any shorts there. It wouldn’t be the outcome that’d be repulsive; it would be the intentions.

And am I the only one who’s a little bothered by the fact that the judge presiding was a woman? I’m honestly torn on this one. On the one hand, she has the right to her opinion, and what would I be standing for if I were forcing a set of beliefs on someone simply because of their gender? But on the other hand, it sends chills down my spine to read about broken solidarity in womanhood, to see another female perpetuating victim-blaming.

All I’m saying, I guess, is that women are people, too. We’re to be valued for our ideas (which can be as brilliant or idiotic as men’s can be), not for what’s up our skirts.