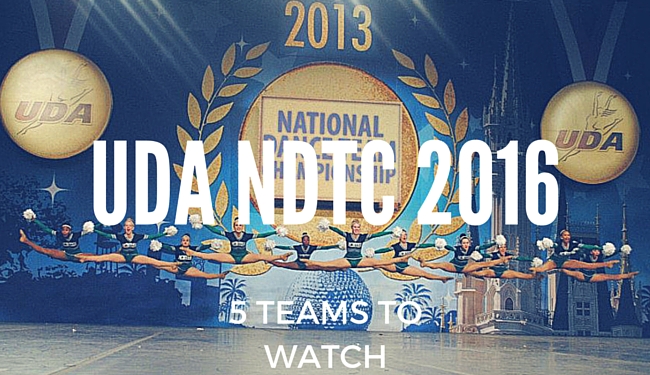 If you all thought I loved UDA College Nationals, you ain’t seen nothing yet… I’m just dying for UDA National Dance Team Championships to get rolling.

I feel like the NDTC is something that really got me into dance team and dance in general. I’ll never forget seeing one of the great teams for the very first time, and seeing a whole new world of dance. I feel like every year I fall in love with dancing a little bit more in a little different way watching the NDTC.

I’m really looking forward to the UDA high school nationals this year because they have seriously switched up the game adding in the medium category. Honestly I think it’s a pretty good call. If you look at some of the winning large teams compared to the small teams, they really aren’t much bigger. It’s not super fair to the teams that really are big… Like 20-something dancers big.

Anywho, amongst all this excitement about the new categories, these are the teams I’m just dying to see this year:

I’m putting them first because it’s honestly no surprise. I ranted and raved about them last year because every time they dance I die. I think they’re dancing in medium this year, which will be really interesting considering it’ll be a brand new category and we really don’t know for sure who they’ll be against. Imagine if the medium category is like, Westmoore, Coral Reef, and Eden Prairie… Like shit, that’d be a killer division. I’m dying to know who is joining them in medium!

Eisenhower brought something to UDA that isn’t usually brought… a fierce jazz. You see a ton of fierce jazz at NDA — both high school and college — but you see way more lyrical at UDA. But last year Eisenhower fucking brought it. Nevermind the fact that they have approximately nine thousand squillion dancers on that floor and they’re super clean… I really hope that they stick with their fierce jazz this year, because it was such a breath of fresh air.

I don’t know much about Floyd Central’s program except that Todd Sharp is their coach, and I respect the actual fuck out of Coach Todd Sharp. If he runs his Floyd Central team anything like his Louisville teams, then I know that these girls are hardworking, strive for nothing but the best, and are driven toward success. For years Floyd Central has been in the mix for both hip hop and pom, and I really want this year to be their year.

What freaking technicians… I feel like Eden Prairie has been such an underrated team for the past few years, but they honestly have such a solid program and a great group of dancers. I feel like one of the reasons why they might not have done as well in jazz last year is because their routine was kind of confusing. Where they trying to do an Adam and Eve thing? Harkening back to Minnesota’s Garden of Eden routine a few years ago? I really don’t know, but pushing past my confusions I actually really loved what they did. I hope they bring it with something fierce this year, because they’re one of the teams I really think could take the whole competition.

So it’s probably cheating that I’m repeating two teams two years in a row, but Los Alomitos really deserves it. They had the hands down most entertaining routine from the entire NDTC last year, and they genuinely left me on the edge of my seat to see what they will do this year. Hats off to you ladies, Los Alos.