March Madness. Opinion piece. You’re probably expecting me to tell you which teams I want to win, who I want to lose, and all about my bracket. I hate to disappoint, but alas, disappoint is exactly what I plan to do. I will, however, give all the basketball fans out there this: Duke’s loss was the best bracket-buster of my life. I hate Duke like I hate green vegetables (which, if you’ve ever met me, you’d know is a lot), so needless to say I was pretty amped about that.

Tournament upsets aside, I’m here to be the biggest buzzkill in America; I am here to say that March Madness is one of the most ludicrous things I’ve ever heard of. The only thing that’s “madness” about it is that people bet money on this thing! According to Time magazine, last year the total amount wagered on March Madness was $12 billion; there’s even a contest floating around out there 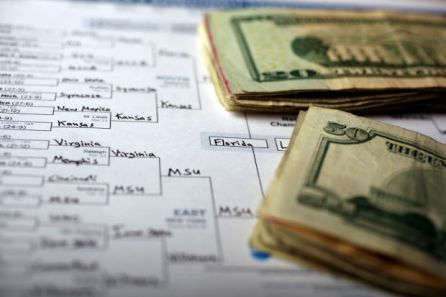 willing to reward someone $1 billion if they make a perfect bracket. I guess everyone is entitled to where they spend and make their money, but really? $12 billion? On college basketball?

Aside from the absurd bets people are making on this thing, Time also says there is a productivity loss of between $192 million and $4 billion for companies during March Madness. I’m sorry, but what? Sure, maybe those numbers might sound stretched, and sure, it’s hard to know exactly how they calculated them, but I’m pretty comfortable saying that those numbers didn’t come out of thin air.

Even if those numbers are a little crazy, I think there’s validity in being concerned with productivity in such an absurd ritual. How productive are we really during events like this? A little show of hands: how many of you check your phones during class to check on the games and the state of your bracket? How many of you skip class to watch a game? How many of you would if you went to UConn or Kentucky or UNC? Am I right, or am I right?

I hate being the rain on everyone’s parade (just kidding… I don’t), but March Madness, and sports betting/fanaticism in general, is pretty ridiculous. I’ve said it about proms and I’ll say it about basketball too: if we all take the money and energy we spend on this thing and put it toward something good (remember that world peace thing?), think of the change we could make.